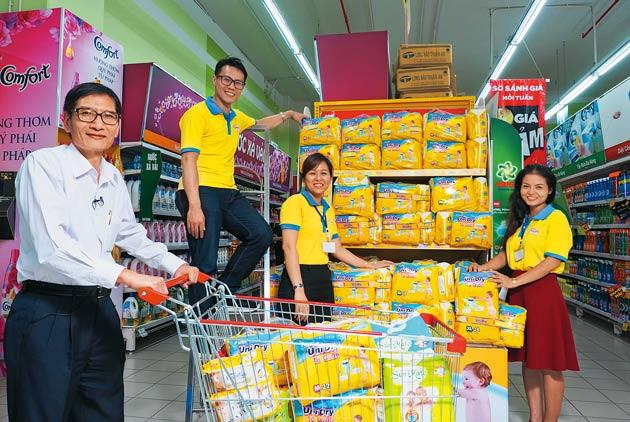 We’re still small,” says Taisun International (Holding) Corporation President Terry Tai modestly. Yet Taisun is not exactly small, ranking fourth in Vietnam and first in Cambodia. The company counts such global giants as Unilver, Proctor and Gamble, and Johnson & Johnson as its competitors.

Taisun is not in China. “Everybody is there, so how can I go up against them? We’re too small. We’ll never get a piece of mature front-line markets. The opportunities far outweigh the risks in the ASEAN countries, as long as you expend maximum effort within controlled risk. I chose Vietnam because, for one thing, it has a large enough population, and also because it’s the poorest,” says Tai. Going up against the big brands, he goes for markets that they either have no time for, or that have not attracted their attention. “Olympic athletes don’t compete in regional games. We make our money from time lags,” he says. And as it turns out, Taisun is the top producer of disposable diapers in Vietnam and Cambodia.

“According to game theory, instead of just putting your shoulder to the grindstone and working hard, you look around to see where the big boys are playing, avoid them, and find a place to survive,” says Tai. “For instance, Cambodia, with its population of 15 million, is not large. There is low product coverage, so there is much progress left to make. Competition in Vietnam, on the other hand, is fierce as competitors vie for territory. If the Asia-Pacific regional manager and CEO of a major international brand lost Vietnam, he’d probably be transferred somewhere else, but if he were to lose Cambodia, it would likely not be an issue. So I have a monopoly in Cambodia.” Last year Taisun achieved nearly NT$1.4 billion in revenue, with earnings per share reaching NT$8.

Taisun’s manufacturing facility is situated in an old industrial area of Ho Chi Minh City, where there are no other Taiwanese-invested enterprises to be found. Tai’s thinking in selecting the address is amusing. “No homework was necessary. Unilever is right next door, so they’ve already done the work for me. We even recruited personnel away from them. Everyone knows the drill – simple as that,” he says with a chuckle.

“Our competitor was only making feminine napkins at the time; they thought it was still too early to get into disposable diapers, which cost more to make. The big companies are afraid [of the risks], and shy away from investment as a result.”

However, Tai does not have a big ego, and is quick to admit that his factory started by using Chinese knock-off manufacturing equipment. “As long as it does the job. Quality is more important, so it’s okay if it’s a little slower.”

“I’m not sure how to do it; my approach is to just keep trying,” he says. Back in 2000 when he first set up the plant, Vietnam had no supermarkets or big box stores, so he just fended for himself. “I’ve been all around Vietnam three times, like a politician on the campaign trail, calling on agents and distributors. You can’t make it without doing that,” he stresses.

The trick he uses to convince people to sell his products is something he picked up when he was working as a trading agent. “Back then, these places were all quite backward, and the big brands paid them no heed. So when I approached a business about working together, the owner would be very excited and gracious, but conditions were terrible. A lot of them just placed a couple of stools under the shade of a tree and we talked right there, and they would kindly offer me a soda. Then a leaf would fall into my glass,” he relates. And he would go ahead and keep drinking from it without a second thought.

A junior college graduate with a longstanding keen interest in English, Tai helped a diaper company import raw materials to Taiwan. Thirty years ago, after the company he worked at went under, Tai relied on his English skills and connections with major paper pulp suppliers to set himself up as an agent in Southeast Asia for the big-name manufacturers, while also importing disposable diapers from various countries for sale throughout the region. “In the same way, I profited from the lag time, since the customer base in these markets was too small for the international manufacturers to even consider setting up companies to serve them,” he says.

Pioneering virgin territory in Indonesia and the Philippines, he kept building and growing his business until he began to sense danger, prompting him to move upstream. “We grew to the point that we started stepping on the toes of the big manufacturers’ Singapore or Hong Kong branch companies, who basically told us ‘you’re too big now.’ They were telling us they were going to brush us aside and do it themselves.”

Engaging in trading is about making money on information. The Internet made everything transparent, which made Tai feel threatened. With enough capital in hand, and familiarity with the market supply chain, he went ahead and opened his own plant.

Seeing how well he was doing in Vietnam, the big manufacturers “followed suit within one year. But they didn’t knock me out. Instead, they heated the market up. Of course, they packed heavy artillery, forcing me to upgrade.” At the time of this interview, Taisun was working on a collaboration with Siemens to upgrade its manufacturing facilities to Industry 4.0 standards.

Tai comes off to his executives as stubborn, perhaps because he shuns gatherings with other Taiwanese businesspeople and does not rub noses with government officials. By his account, there are three reasons for this:

- Do not be an economic pillager. “I often urge other Taiwanese businesspeople to do something about changing this image,” he says. Annual wage increases of 12 to 15 percent in Vietnam have Taiwanese businesspeople crying in agony and racking their brains trying to figure out how to get around them. Meanwhile, he says, “I am completely unaffected. Our company undertakes far higher wage increases than mandated by the government (of Vietnam). The way it is done is, each executive writes down a figure, everyone compares numbers, and we choose the highest one. And I am usually the one writing down the highest figure,” Tai says.

Factory manager Hsu Hung-lung relates that Taisun was completely unscathed by the anti-Chinese riots that broke out in Vietnam on May 13, 2014, thanks entirely to workers that voluntarily took turns forming a protective cordon around the plant. “The instigating motorcycle gang took one look at them and left,” he says.

- Emphasis on local relationships. Tai relates, “Just in terms of nearby orphanages, we have ‘adopted’ six or seven of them.”

- Maintain distance from politicians. “You want to establish a normal, healthy enterprise – one that demands government respect. You go ahead and pay your taxes faithfully, treat your employees well, and be good to your community. That’s the best protection you could ask for,” he says.

Taisun’s new plant in Cambodia will begin operation in the third quarter, and the company will be listed on the Taiwan Stock Exchange. Given the rapid pace at which Taiwan’s population is aging, we can expect Tai’s next moves to include Taiwan’s adult diaper and long-term care markets.